This year more and more MBA grads are “sticking it to the man” and choosing startup firms over industry giants. While consulting jobs still attract many MBAs each year, the number of students with an interest in entrepreneurship is on the rise. Harvard reports that demand for entrepreneurship-related offerings increases by 20%-30% every year. Additionally, programs such as London Business School and Chicago’s Booth School of Business have reported the number of students entering new ventures after school have increased fivefold since 2012. At about 5% of post-grad positions, startups still claim a relatively small amount MBA graduates. However, within 3 years of graduating, nearly a quarter of MBA grads start their own company. An analysis of our 250,000+ data points reveal what it’s like to work for a startup company after graduating from an MBA program.

MBA graduates entering startups shouldn’t expect to be paid as much as some of their peers, as the total average starting compensation of $147,309 is only in the 36th percentile. The average salary of an MBA graduate working in a startup is $109,082 (43rd percentile), and typical signing and relocation bonuses are negligible. However average stock compensations of $9,592 (82nd percentile) help supplement the starting compensation. Receiving equity is a common aspect of compensation at startups, and around 60% of MBA graduates working full time in the field report being rewarded equity. Startups are fond of this practice because they are typically low on cash flow in their early stages, and awarding equity acts as an incentive and ties compensation to company performance. It’s typical to see the amount of equity decrease as a startup progresses into later stages and has more cash flow, and equity shares will be subject to vesting. For example, employees in seed stage firms reported a median equity amount of 1.42%, while the percentage reached 0% in late stage firms. However increased cash flow in late stage firms led to an average salary of $132,500. 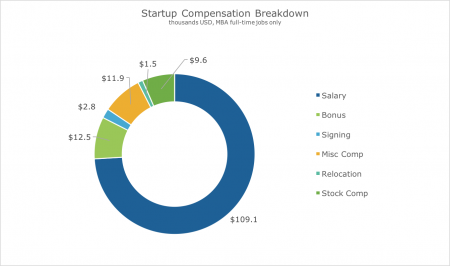 Despite earning less, MBA graduates working in startups still work just as hard as their higher-profile peers. A full time employee in the industry can expect to work 53 hours per week, which is only 1 hour less than average. In contrast, the percent of time spent traveling is less than half of the average at only 10%. Cities with higher concentrations of startups include (as you might expect) San Francisco, Chicago, New York, and Boston.

Satisfaction scores in the startup world are on par with average for MBA graduates. In fact, the impact of work score of 6.9/10 and average culture score of 6.8/10 exactly reflect our data set’s average. Working in a startup can present a unique set of stressors, and it’s important to take time to manage that stress. While day-to-day activities may be standardized in large firms, daily activities in startups can be a bit more unpredictable. MBA graduates working in startups should also expect to help with decisions that can have major consequences on the business every single day. 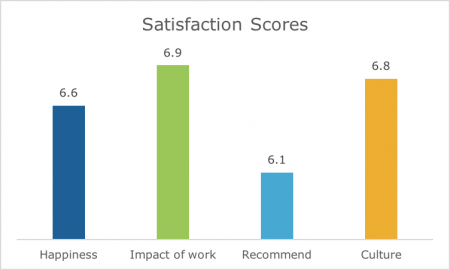 MBA students interested in an internship with a startup should anticipate an average total compensation of $65,461. Unlike full time positions, internships do not typically receive equity, and additional compensation tacks on a little less than $2,000 to the average base salary. However an internship with a later stage firm can provide a higher salary, with the average at $85,000. If you’ve considered interning with a startup – or taking some time to work on a project of your own – you’re not alone. In the summer between their first and second year, 11% of University of Pennsylvania’s Wharton class of 2013 spent their time off school at an early-stage venture or working on their own. Fast forward to 2016, and that number has increased to 16%.

While startups exist in nearly every industry, there are definitely some concepts and industries that are trending. For example, software startups are dominating the scene right now and eCommerce companies aren’t far behind them. Some popular subcategories within the technology startup space include: internet of things (IOT) software integration (think Nest or wearables like Fitbit), consumer privacy protection, and counterterrorism. 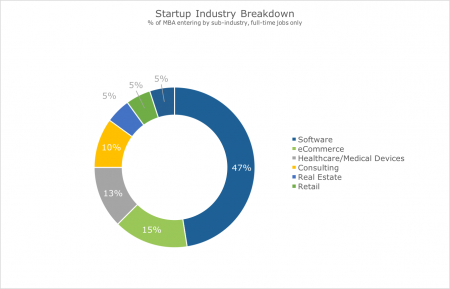 Just as there are any number of functions that startups can thrive in, there are a variety of functional needs within startups. Depending on the industry and firm, essential roles tend to be technical and specialized. However as the firm grows, MBAs have the opportunity to shape a company’s operations or strategy. Business development and operations vie for the most common functional specializations, but other MBA functions such as product management and consulting are evident as well.

In order to secure a position with a startup it’s important to first assess why you want to go down this path. If you value working in small teams and are able to make decisions under pressure, this industry could be a good fit. However, it’s best to avoid these positions if you’re hoping to get rich in the short-term, or are looking for a job with fewer hours. Startups, by their nature, are small and abundant. Therefore, most don’t recruit on campus and they don’t have structured recruiting cycles. You’ll be left to connect with companies on your own, as some schools aren’t as capable of advising you in search of startup positions. Prior to your interview do as much research as you can on the company, the industry, other players, and potential drivers in the business. Demanding hours and decreased pay have the ability to weed out those not meant for the startup world, but rewards can be great for those with the passion and drive to see it through.