You are here: Home / Blog / P&Q: Re-applicants are accepted at lower rates

One in ten students Harvard Business School enrolled this year got into the school’s prestigious MBA program after initially being rejected by the admissions office.

Dee Leopold, managing director of MBA admissions and financial aid, said that this year’s class of 937 students includes 94 who had been re-applicants. “They didn’t get in the first time they applied!,” she said yesterday (Sept. 3) in a blog post.

Sandy Kreisberg, a leading MBA admissions consultant, welcomed the disclosure. “Good for HBS,” he says, “but one would like to know how many of those were kids who flunked the interview for coughing the wrong way and did not make that mistake next time? How many applied from a better job x years later? How many re-took the GMAT or hired me?”

Still, the news will likely encourage dinged applicants to try again at HBS. Adds Betsy Massar, another admissions consultant, “This is great news! Finally debunking the myth that applying as a re-applicant puts you at a disadvantage. People grow, and that’s a good thing. I am so glad that Dee Leopold continues to err on the side of disclosure. No need for the reapplicant percentage to be a state secret.”

“This statistic should be music to the ears of re-applicants,” says Chioma Isiadinso, co-founder and CEO of an admissions consulting firm. “The message Dee is sending is that re-applicants are welcome and that a portion of them do succeed in gaining admission to HBS. This is a big shift away from the way it was before where there was more of a culture of ‘we’ve seen you before, what is really new about your candidacy now?,’ adds Isiadinso, who was once a member of HBS’ admissions committee. “And this isn’t just window dressing statistics, it is real. A majority of our re-applicant clients have gotten into HBS proving to me that they do put their money where their mouth is–re-applicants are truly welcome at HBS. But you need a compelling story to make it in the second time around.”

Only a few of the highly selective schools tend to reveal this information. Generally, re-applicants are accepted at lower rates than the acceptance levels for the entire pool (see table below). One exception: Columbia Business School. In the 2013-2014 academic year, roughly 8% of the 5,799 candidates who applied to Columbia were re-applicants. The acceptance rate for those once-rejected candidates was 21%, slightly higher than the school’s overall 18% selectivity. At Yale University’s School of Management, 6% of its 2,756 applicants in the 2013-2014 academic year had been dinged before. The re-applicant acceptance rate at Yale that year was 22%, slightly under the overall 22% acceptance rate for the entire applicant pool.

How MBA Re-Applicants Fare In The Applicant Pool

At every top school except Columbia, dinged candidates have a lower acceptance rate than the overall acceptance for the entire applicant pool 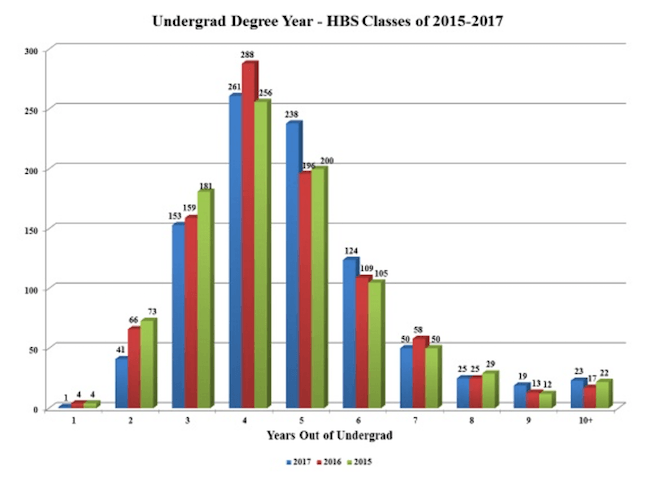 At Harvard, Leopold also revealed that the median work experience for this year’s class was four years since college. “Plenty of incoming students coming before and after, but wanted you to see this,” wrote Leopold, who did her annual release of a histogram of the years separating current students from their undergraduate experiences.

The chart shows that the largest group of first-year, or RC (for required curriculum), students have been out of their undergraduate colleges for four years. Some 261 students, or 27.9% of the total, fit that description. The second largest chunk, 238 RCs, or 25.4%, had racked up five years of work experience.

A TREND? HBS SEEMS TO BE SHIFTING AWAY FROM APPLICANTS WITH LESS THAN FOUR YEARS OF WORK EXPERIENCE

If there is a discernible trend in the numbers, it is that Harvard appears to be enrolling slightly older students. Only one student in the class of 937 has as little as one year of work experience, and just 23 boast more than ten years.

The trend becomes ever more apparent when you look at the numbers over the full three years displayed in the histogram. The number of students in this year’s incoming class with three or fewer years of experience have fallen by 24.4% since 2013 to 195 from 258. Meantime, students with four to six years of experience have risen by 11% to 623 from 561. The biggest year-over-year increase was in the five years category, a 17.6% jump to 238 this year from 196 a year earlier.

As Leopold makes clear, “The common sense advice still holds: You need work experience to be at HBS, but there is no universal ‘right time to come,’” she added. “Also worth noting: This really does change from year-to-year.”

Massar says the table also debunks the myth that HBS only admits those with a certain amount of work experience. “I constantly direct students toward the years-of-experience histogram,” she says. “It’s also a great myth debunker and there’s usually something for everyone
to feel hopeful about.”

This website uses cookies to improve your experience while you navigate through the website. Out of these cookies, the cookies that are categorized as necessary are stored on your browser as they are essential for the working of basic functionalities of the website. We also use third-party cookies that help us analyze and understand how you use this website. These cookies will be stored in your browser only with your consent. You also have the option to opt-out of these cookies. But opting out of some of these cookies may have an effect on your browsing experience.
Necessary Always Enabled
Necessary cookies are absolutely essential for the website to function properly. This category only includes cookies that ensures basic functionalities and security features of the website. These cookies do not store any personal information.
Non-necessary
Any cookies that may not be particularly necessary for the website to function and is used specifically to collect user personal data via analytics, ads, other embedded contents are termed as non-necessary cookies. It is mandatory to procure user consent prior to running these cookies on your website.
SAVE & ACCEPT
Before you go...