The MBA is being transformed, for better and for worse 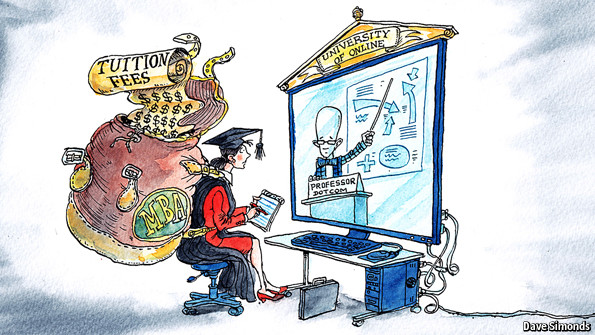 The master of business administration is one of the success stories of our time. Since it was first offered by Harvard Business School (HBS) in 1908, the MBA’s rise has seemed unstoppable. Having conquered America, it reached Europe’s shores in 1957 when INSEAD, a French school, launched a programme. In the past couple of decades, Asia, South America and Africa have succumbed. Today, it is the second most popular postgraduate degree in America (after education).

Whereas 40 years ago, American colleges graduated similar numbers of lawyers and MBAs, nowadays nearly four times as many students pass out with a business-school master’s degree than with a law-school one (see chart). Although demand among Americans is plateauing, the slack has been taken up by emerging markets, particularly in Asia. India now has around 2,000 business schools, more than any other country. China has fewer, but their numbers are growing quickly. It has an estimated 250 MBA programmes, graduating around 30,000 students each year. This is less than half the number it will need over the next decade, according to Hao Hongrui of DHD, a consultancy.

Yet for all its success, these are demanding times. For a start, MBA candidates are beginning to question the return on investment of such expensive programmes. Business schools claim their graduates are less concerned than they once were about earning fabulous salaries. Instead of trumpeting the number of students who get high-paying jobs in finance, they now reel off examples of those who join non-profits or launch social enterprises. This fits the socially-aware image they wish to portray after the financial crisis.

However, there is a whiff of post-hoc rationalisation in this. Data from our latest ranking of full-time MBA courses (see article), show that the average basic salary of graduating students is now $94,000, around $1,500 less than it was five years ago. And yet our survey of business-school students suggests that they are more focused on the size of their pay-packets than those who enrolled before the crisis. 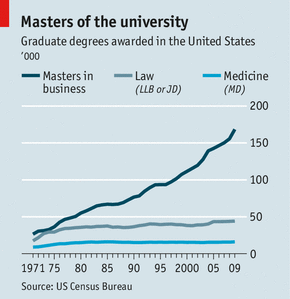 As salaries have fallen, tuition fees have risen. At Chicago, our top-ranked school, two years’ tuition costs $112,000, an increase of around $17,000 since 2008. Harvard’s prices have risen by nearly $25,000. A degree that once let the brightest students name their starting salaries now warrants a careful cost-benefit analysis.

Concentrate!
The MBA is changing in other ways, too. The days in which students study a broad set of management skills, with little specialisation, are numbered. Most business schools now encourage students to concentrate on one area, such as finance. An increasing number of MBA courses are tailored to particular industries, such as health care, luxury goods or, in one case, wine and spirits management.

This is partly because students now have to have a clear career plan before they apply to business school. Competition for plum summer internships, the most common route to a post-MBA job, begins on the first day of school. Such is the focus on finding the right job, laments Sunil Kumar, dean of Chicago’s Booth School of Business, that students sometimes forget to savour the academic experience.

Business schools are expanding in other ways too. University administrators are wont to view them as cash cows and allow them to graze on other faculties accordingly. For years, they have been poaching professors from economics departments. Now they also woo psychologists and sociologists to teach softer subjects such as leadership and organisational behaviour. And their scope seems to be expanding.

“Big data” is currently one of the hottest study areas. York University in Canada, for example, recently launched a Master’s in Business Analytics. It recruits students with solid quantitative backgrounds, such as mathematicians and engineers, who spend half their time poring over mathematical models and half taking MBA classes. It is not enough to be a top-notch statistician nowadays, says Murat Kristal, director of the programme. Firms want people who can also understand the business implications of their analysis.

Perhaps the most disruptive influence on MBAs will be educational technology. Many institutions, from leviathans such as the University of Pennsylvania’s Wharton school to relative tiddlers such as Grenoble in France, now make some of their courses available free of charge as “massive online open courses”, or MOOCs. It is uncertain what long-term effect this will have. Roger Martin, the recently departed dean of Toronto’s Rotman school, clearly remains unconvinced: “Giving away your product? In what way is that a business?”

Instead, it is more likely disruption will be from better distance-learning technology. Demand for mass-market, paid-for but cheap online MBAs, delivered by institutions such as the University of Phoenix, is not new. However, it has been rarer for prestigious, traditional universities to offer distance-learning MBAs. This is changing. Top-ranked schools are spending heavily to equip themselves for this. Chicago, for example, has built video studios at its American campus so that students on its foreign campuses, in London and Singapore, do not miss its best tutors’ lectures.

The University of North Carolina at Chapel Hill (UNC) has gone further. It is one of the first top-ranked schools to offer a full-time MBA programme entirely at a distance. It has just enrolled 500 students in the second intake of its MBA@UNC programme, an online MBA that can be completed in 18 months. This is close to double the number it enrolls for its campus-based version. Interestingly, it typically costs a little more than attending Chapel Hill, partly because the technology has not come cheap. Yet students are signing up because they prefer not to give up their jobs, or because they cannot move to the campus for other reasons.

The tipping-point
Douglas Shackelford, the programme’s director, says that online classroom technology has now reached a tipping-point, whereby it is at least as good as a real classroom. Classes on the programme are limited to 15 students, spread across the globe, all of whom can interact. It has also allowed UNC to employ the best tutors whether or not they are in North Carolina. Professors lecture from India, France and across America. All lectures and class discussions are available in perpetuity, to be rewatched before exams or even after students graduate. Yet Mr Shackelford thinks he is only scratching the surface: “In 10 years we will look back and be embarrassed it was so simple.”

This may come at a cost, however. As students get more choice, so business schools, perhaps for the first time, will be forced to compete on price, says Clayton Christensen, the Harvard professor who coined the idea of disruptive innovation. Many will find they do not have the resources, so there could, thinks Mr Christensen, be many casualties. Students might celebrate; business schools may prefer to keep the champagne on ice.